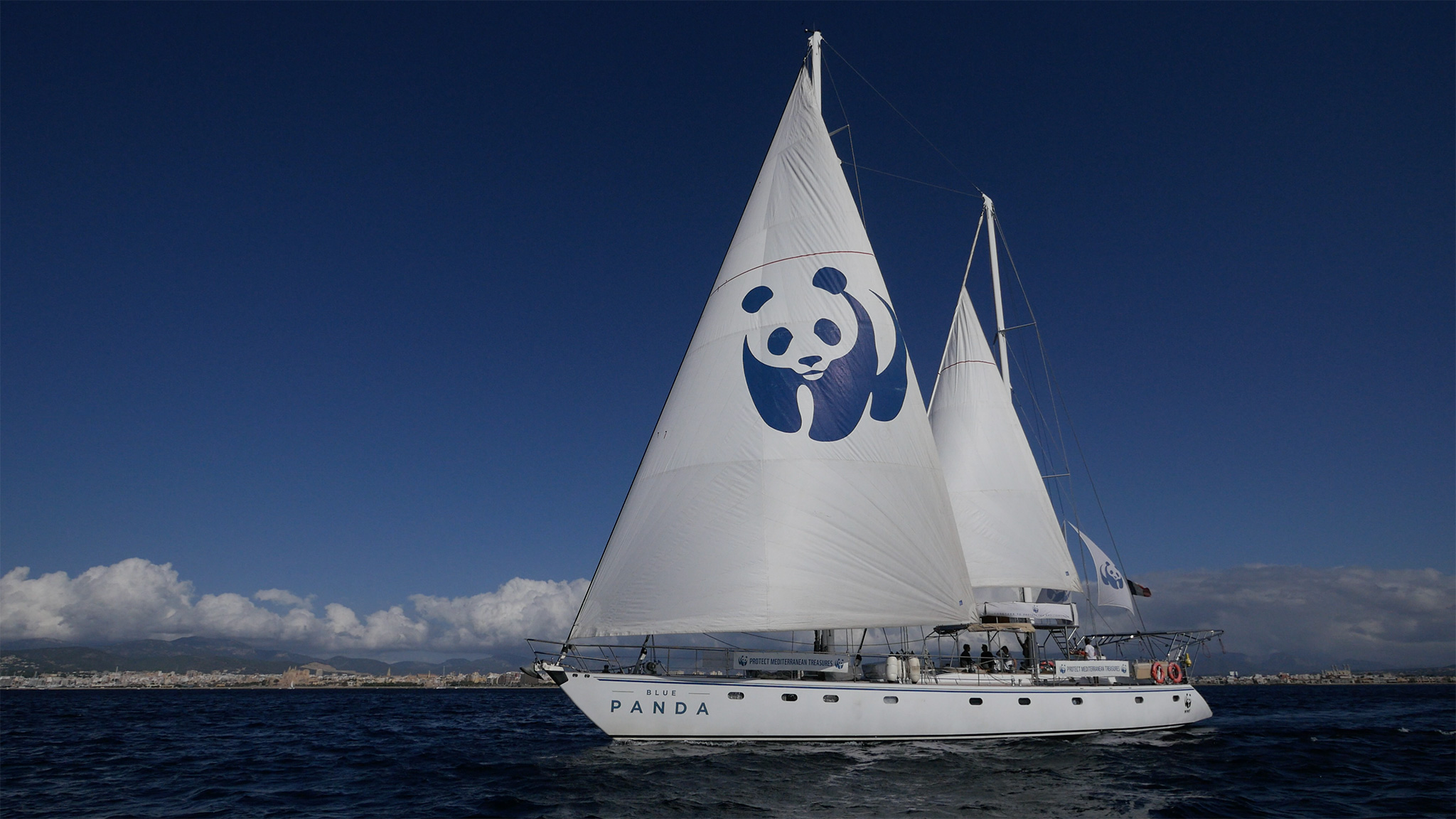 WWF's Blue Panda concludes its expedition in the Balearic Islands

WWF's Blue Panda concludes its expedition in the Balearic Islands

WWF Spain and the Marilles Foundation are calling for more funding for marine reserves in the Balearics.

The WWF sailing boat Blue Panda today concludes its five-month expedition around the Mediterranean to call for 30 % of marine protected areas. Over the last two weeks, the Blue Panda has travelled around Mallorca and Ibiza, where it has held open days for the public and meetings with various sectors to work on the Tagomago reserve.

The Blue Panda set sail on Wednesday 28 th from Mallorca to Ibiza where on board the boat meetings were held with various sectors to work on the Tagomago reserve. However, the unfavourable weather these days has forced the cancellation of some of the planned activities, such as the scientific activity in the reserve and the removal of fishing nets.

In Ibiza, the Blue Panda also opened its doors to the public to show them the work of the organisation for the protection of the Mediterranean and the work of the fishermen of the Cofradias of Ibiza and Sant Antoni in the sustainable management of fishing resources.

"Closing the campaign in the Balearic Islands has an important symbolism not only because of its environmental importance, but also because of the example we want to show with the Tagomago marine reserve. An example of joint work between public institutions such as the Ibiza Council, the Government, the fishermen's guilds and organisations such as WWF, Gen-Gob and the Marilles Foundation for the protection of this area rich in biodiversity," says José Luis García, head of the WWF's marine programme.

"Forty percent of the inland waters around the Balearic Islands, under the management of the Balearic Government, have some kind of legal protection. In the case of the waters of the Balearic Sea, up to a depth of 1,000 m, this protection is 20 %. However, only an area of 0.16 % can be considered as integral reserves," confirms Aniol Esteban, director of the Marilles Foundation, and adds: "It will have no problem in achieving a minimum of 30% in 2030, but it is a long way from having 10% of MPAs with strict protection in 2030.

The waters of the Tagomago marine reserve are of great ecological value, from phanerogam meadows such as Posidonia to rhodolith or coralligenous communities. Other species that inhabit its waters include lobster, dentex, grouper and amberjack. A recent study, based on the methodology of visual censuses of fish, confirms the importance of these integral reserves and it has been possible to estimate that the biomass within the Tagomago reserve of the main commercial species is above that of other waters on the island of Ibiza with similar ecological characteristics.

The Blue Panda successfully closes its campaign after covering more than 8,000 miles and five countries, stopping in Zakynthos (Greece), Kas Kekova (Turkey), Corsica (France) and Tabarka (Tunisia). These marine protected areas are part of the network covering 4% of Mediterranean waters, but of these, only 1.27% is effectively protected. Meanwhile, the rest of the sea is defenceless in the face of resource exploitation that damages the health of the Mediterranean and its ability to cope with threats, including the effects of climate change.

"At least 30% of the oceans' surface area needs to be protected and effectively managed. We are calling for at least 10% to be integral reserves and to serve as restoration areas for the rest of the ocean," says José Luis García.

"The results of a study published by the Marilles Foundation on the Cala Rajada-Llevant Marine Reserve in the Balearic Islands show that the reserve generates 10 euros of profit for every euro invested, 4.8 million euros of profit per year, most of which is captured directly by tourist activity," says Aniol Esteban. "However, MPAs suffer from a large economic deficit, their funding has stagnated at around 3 million euros per year, according to another study by Marilles, when the funding needs for their proper management would be at least five times more, according to experts. More investment is needed in the Balearic marine reserves because they can be a key to economic recovery," he concludes.

With the presence of the Blue Panda on the island of Ibiza, a large number of the main players in the management of the reserve have gathered on board the sailing vessel to take up the initiative of a potential extension towards the northwest part of the Tagomago reserve. In addition to the expansion of the Tagomago reserve, the Balearic Government is working on the expansion of the marine reserves of El Toro and Malgrats in the municipality of Calvià. Conservation organisations have requested that the Govern be ambitious in its proposal and that its limits reach as far as Illa del Sec.

Publicise the evolution of the Marine Reserve and involve society.

The Balearic Sea: priorities for conservation

Lecture by Enric Ballesteros on 24 November.

Study of marine natural capital in the eastern area of Spain, Llevant